The message of this ring reveals a family tragedy that is still touching more then 200 years after its making.

We all know memorial jewelry and we all have seen the tombstones and weeping willows nicely created out of hair and all such. We have seen the names and dates but they ever hardly move us. And so to us as experts too till this very ring came in. Although of nice and yet sober design, not the most impressive ring on first sight but turn it over, read the engraving and suddenly you are transported to a tragic moment 200 years ago…the inscription in the ring reads:

Then take a look at the top of the ring again and know that the hair used is from two little children from the same family who died in the same year, 1792. One child of 4 years old and then 5 months later the baby of only 4 months old……..

It is an old saying that one is really dead when one is out of people's mind; perhaps it is a warming thought that these children still aren't out of the people's mind yet, not even after 200 years.


OBJECT GROUP : rings
COUNTRY OF ORIGIN : Most probably England
STYLE : Georgian (pre-Victorian)
PERIOD : 1792
PERIOD SPECIFICS : 1792, the year when the French Revolution took place: Storming of the Tuileries Palace. Louis XVI of France is arrested and taken into custody; the year when George Washington got re-elected as President of the United States and only 7 years after the dollar got chosen as the monetary unit for the United States.
THEME : Mourning jewels - At that time there was actually a jewel for every stage of the mourning period.
MATERIAL : 14K red gold
HISTORY HAIR JEWELRY : Besides using hair of beloved deceased, normal hair jewelry without the mourning theme came also in fashion In the first half of the 19th century (ca. 1830). Since then and till the second half of the 19th century (ca. 1870), it was possible for a woman to sell her hair at special markets. The hair was bought by hair dealers who supplied it to special hair jewelry craftsmen. At a certain moment that sort of jewelry became so fashionable that wealthy women started haircraft as a hobby. In fashion magazines of that time you could find complete descriptions of ways to turn hair into little pieces of art.
WEIGHT : 8.60 gram (5.53 dwt)
HALLMARKS : No trace
CONDITION : Excellent condition - (click here for our condition scale)
SIZE : length top approx. 3.26 cm (1.28 inch)
RING SIZE CONTINENTAL: 17¾ & 56
RING SIZE US: 7½
RING SIZE UK: O½

RESIZING : The ring can be resized and it will be our pleasure to resize the ring for you (if needed) at our expense. Only for extreme resizing we have to charge. For a comparing list of ring sizes, click here. 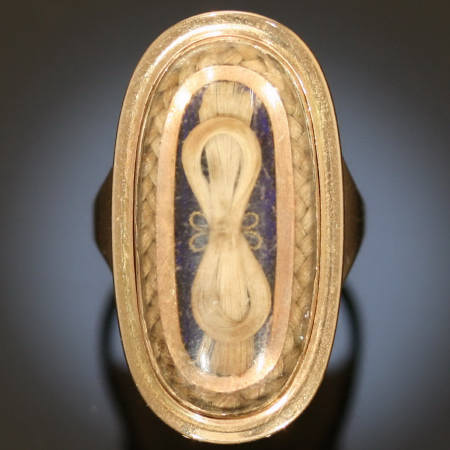