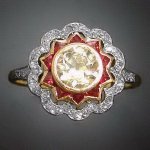 An engagement ring is a finger ring of no generally accepted form that is given by a man to his fiancée as a token of marriage engagement, in the manner of the earlier betrothal ring, and indistinguishable in form or style. The engagement ring is worn by a woman indicating her engagement to be married. In some countries, such as the United Kingdom, it is worn on the left-hand ring finger, while in other countries, such as Poland and Ukraine, it is customary for the ring to be worn on the right-hand.

In recent years such rings have normally been set with a gemstone, usually a diamond as a solitaire, of varying sizes, cuts, styles, and cost, but in the 19th century some were set with a pearl. In the same century the custom arose in England of separate engagement ring and wedding ring, and in very recent years such rings have sometimes been made en suite as a matching pair of similar style.

By modern convention in countries such as the United States, the ring is usually presented as a betrothal gift by a man to his prospective bride while or directly after she accepts his marriage proposal. It represents a formal agreement to future marriage.

Here at Adin we have some interesting antique, vintage or estate engagement rings. You'll be suprised how easy it is to find beatiful diamond, ruby, opal, sapphire or emerald engagement rings.

Because of their beauty, strength and durability, diamonds for centuries have symbolized the eternal love of two people that have pledged to join together in marriage.

The actual tradition of giving a diamond engagement ring as a promise of marriage is thought to have started in 1477, when Archduke Maximillian of Austria presented Mary of Burgundy with a diamond ring. This practice became a trend among royalty and the wealthy, and the rest of the world's upper classes began to embrace it over the next few centuries.

But giving a diamond engagement ring as a symbol of betrothal really started to become an established, widespread tradition once the gems became more accessible and affordable to the public. And that all started in 1870 with the discovery of diamond mines in South Africa. These new sources flooded the market and led to the creation of the De Beers conglomerate to control the worldwide diamond supply. During these early decades of the De Beers dynasty, diamond sales flourished in Europe, the United States and other key world markets.

By the late 1930s, however, the United States and much of Europe was in the wake of the Depression, and Europe was bracing for the start of World War II - and demand for diamonds had plummeted to an all-time low. Thus, De Beers diamond mogul Sir Ernest Oppenheimer sent his son Harry to New York to meet with the N.W Ayer advertising agency. The plan was to transform America's taste for small, low-quality stones into a true luxury market that would absorb the excess production of higher-quality gems no longer selling in Europe. The result of Ayer and young Oppenheimer's efforts was a campaign - led by the enduring "A Diamond is Forever" slogan - that helped turn the United States into the premier market for the world's supply of gem-quality diamonds. The successful campaign also cemented the diamond's status as the engagement ring stone of choice in America.

Here are some other interest historical facts related to the engagement ring: