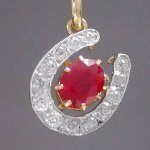 The four-leaf clover is an uncommon variation of the common three-leaf clover. According to superstition, such leaves bring good luck to their finders, especially if found accidentally. Clovers can have more than four leaflets. The most leaflets ever recorded are eighteen. It has been estimated that there are approximately 10,000 three-leaf clovers for every four-leaf clover. According to legend, each leaflet represents something: the first is for hope, the second is for faith, the third is for love, and the fourth is for luck. Legend also holds that if a lady hangs a 4-leaf clover on her door, the next man to come in will become her husband.

Horseshoes are also considered as a good luck charm in many cultures. The shape, fabrication, placement, and manner are all important. A common tradition is that if a horseshoe is hung on a door with the two ends pointing up then good luck will occur. However, if the two ends point downwards then bad luck will occur. Traditions do differ on this point, though. In some cultures, the horseshoe is hung points down (so the luck pours onto you). In others, it is hung points up (so the luck doesn't fall out); still in others it doesn't matter so long as the horseshoe has been used (not new), was found or given (not purchased), and can be touched. In all traditions, luck is contained in the shoe and can pour out through the ends.

The wearing of charms may have begun as a form of amulet to ward off evil spirits or bad luck. In ancient Egypt charms were used for identification and as symbols of faith and luck. Charms also served to identify an individual to the gods in the afterlife. Medieval knights wore charms for protection in battle. Charms also were worn in the dark ages to represent family origin, religious and political convictions. Charm bracelets have been the subjects of several waves of trends. Queen Victoria wore charm bracelets that started a fashion among the European noble classes. Soldiers returning home after World War II brought home trinkets made by craftsmen local to the area where they were fighting to give to loved ones, American teenagers in the 1950s and early 1960s collected charms to record the events in their lives.

In many countries it was believed that coins with holes in them would bring good luck. This belief could link to a similar superstition linked to stones or pebbles that had holes, often called 'Adder Stones', and hung around the neck. Carrying a coin bearing the date of your birth is lucky. In Austria any coin found during a rainstorm is especially lucky, because it is said to have dropped from Heaven. European charms often require silver coins to be used, which are engraved with marks such as an 'X' or are bent. These actions personalize the coin, making it uniquely special for the owner. The lucky 'sixpence' is a well-known example in Great Britain.