Find astonishing examples of Antique mourning jewelry. Worn in memory of the deceased, it usually consisted of rings, pendants of brooches set with amethyst of pearl. 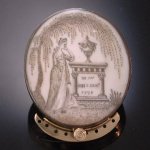 Various articles of jewelry worn in memory of a deceased person during periods of mourning, the styles of which underwent changes from the Memento Mori jewelry of the Middle Ages and the 16th and early 17th centuries to the specifically commemorative pieces of the late 17th century and onwards.

Throughout the period such jewelry preserving hair of the deceased was popular, and in the 19th century jewelry was made of such hair.

The jewelry was decorated with sentimental motifs from the Romantic period of the late 18th century onwards; frequent motifs were a Grecian maid bending over an urn, a weeping willow, or a broken column. The articles so worn included brooches end pendants, often ornamented with pearls or amethysts, but sometimes with diamonds or strass (paste), but the principal articles of mourning jewelry were mourning rings. Such pieces were especially worn in the Victorian ear after the death of Prince Albert in 1861, when they were generally made of jet (or cheaper black glass) in sombre styles.

In our catalogue you'll find some stunning examples of Antique mourning jewelry.