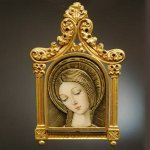 See all our: religious jewelry.

As explained in the "reasons for wearing" section of our "antique jewelry lecture", jewelry is often created for a special occasion or reason to show that the wearer follows a certain group, faith or faith.

The cross, which is today one of the most widely recognised symbols in the world, was used as a Christian symbol from the earliest times.In his book De Corona, written in the year 204, Tertullian tells how it was already a tradition for Christians to trace repeatedly on their foreheads the sign of the cross. Although the cross was known to the early Christians, the crucifix did not appear in use until the fifth century.

Among the symbols employed by the primitive Christians, that of the fish seems to have ranked first in importance. From monumental sources such as tombs it is known that the symbolic fish was familiar to Christians from the earliest times. The fish was depicted as a Christian symbol in the first decades of the second century. Its popularity among Christians was due principally, it would seem, to the famous acrostic consisting of the initial letters of five Greek words forming the word for fish (Ichthys), which words briefly but clearly described the character of Christ and the claim to worship of believers: Iesous Christos Theou Yios Soter, meaning, Jesus Christ, Son of God, Saviour.

Christians from the very beginning adorned their tombs with paintings of Christ, of the saints, of scenes from the Bible and allegorical groups. The catacombs are the cradle of all Christian art. The first Christians had no prejudice against images, pictures, or statues. The idea that they must have feared the danger of idolatry among their new converts is disproved in the simplest way by the pictures even statues, that remain from the first centuries. Other major Christian symbols include the chi-rho monogram, the dove (symbolic of the Holy Spirit), the sacrificial lamb (symbolic of Christ's sacrifice), the vine (symbolising the necessary connectedness of the Christian with Christ) and many others. These all derive from writings found in the New Testament.

In the Jewish culture jewelry have played an important role since biblical times. There are references in the bible to the custom of wearing jewelry both as a decoration and as a symbol. Now, Jewish jewelry is worn to show affiliation with the religion, and as talismans and amulets.

The Star of David ("Magen David" in Hebrew) is the symbol most recognized with Judaism. It was used in Israel in Roman times, but it seems to have become associated with Judaism in particular only in later centuries. In the 17th century it became a practice to put the Star of David on the outside of synagogues, to identify them as Jewish houses of worship; however, it is not clear why this symbol was selected for this. Today the Star of David is a universally recognized symbol of Jews. It appears on the flag of the state of Israel, and the Israeli equivalent of the Red Cross is known as "the Magen David Adom" ("Adom" is red in Hebrew). One of the most common symbols in Jewish jewelry is the Star of David, equivalent to wearing a cross by Christians.

Another popular symbol used in Jewish jewelry is the Hamsa, also known as the "Hamesh hand". The Hamsa appears often in a stylized form, as a hand with three fingers raised, and sometimes with two thumbs arranged symmetrically. Its five fingers are said to symbolize the five books if the Torah. The symbol is used for protection and as a mean to ward of the Evil eye in amulets and charms and can also be found in various places such as home entrances and cars. It is also common to place other symbols in the middle of the Hamsa that are believed to help against the evil eye such as fish, eyes and the Star of David. The colour blue, or more specifically light blue, is also considered protective against the evil eye and many Hamsas are in that colour or with embedded gemstones in different shades of blue. Hamsas are often decorated with Jewish prayers of a protective fashion such as the Sh'ma Prayer, the Birkat HaBayit (Blessing for the Home), or the Tefilat HaDerech (Traveler's Prayer).

The Chai symbol, popularly worn on necklaces, is the Hebrew word "Chai" (means 'living'), consisting of the two Hebrew letters Chet and Yod. This word refers to God. According to the gematrian system, the letters of Chai add up to 18. There have been many mystical numerological speculations about this fact and the custom to give donations and monetary gifts in multiples of 18 as a blessing for long life is very common in Jewish circles.

Other motives found in Jewish jewelry are symbols from the Kabbalah (also known as kabala, cabala) such as the Merkaba, a three-dimensional Star of David, and the Tree of life. Pieces of jewelry are decorated with parts or initials of known Jewish prayers and with 3-letters combinations, believed to represent different names of the Jewish God.

Although most Islamic symbols are non-textual and non-verbal, jewelry with texts from the Koran (sacred book of the Muslims) is not uncommon. Visual symbols that have been used, or are used, to express identification with Islam or a particular tradition within Islam, to evoke feelings of joy, sadness, devotion, etc., or even to stand for beliefs and ideas.

Some symbols, such as the color green, have been associated with Islam for a long time and in many areas; others are of more limited duration and extent.

Muslim art often uses such symbols to represent complex ideas. Islamic architecture may also incorporate such symbols in the decoration of religious edifices such as mosques, khanqahs, dargahs, etc.