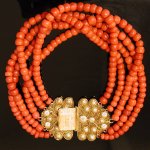 See our: jewelry with coral.

Ox-blood red coral, is just a variety of a more generic substance called coral. Coral is a hard, calcareous organic substance that is the skeleton of various types of polyps, which are small marine invertebrates that live in colonies.

The variety used in jewelry, referred to as corallium nobile (meaning precious coral as opposed to the stony coral that can be found along the reefs in the Pacific atolls), is compact and features no visible indentations. Coral ranges in colour from pinkish-white to ox-blood red. It is mainly used as beads, set 'en cabochon' or carved as cameo. Historically the main carving centers have been Torre del Greco, Genoa in Italy. Today coral is also carved in Korea, China and Japan). Its primary origin was the Mediterranean shores and now also Japan, Hawaii and Australia.

Coral was extensively used in ancient Egypt (sculpting of scarabs) and by the ancient Greeks and the Etruscans who used it to manufacture seals. Coral has been used in the Occidental areas since the 14th century probably because it was believed that coral had amuletic powers and that it could protect people from evil magical spells. Click here for our jewelry with coral.