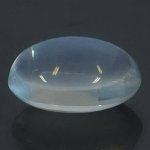 See our: jewelry with cabochons.

Cabochon (from French caboche, knob) - A stone cut with a smooth rounded surface, with no facets and highly polished. Usually it is cut from an opaque or translucent stone (but some emeralds, amethysts and garnets have been so cut), or a stone with a special optical effect (e.g. asteria, opal, moonstone).

The style of cut was used in antiquity and continued until the 15th century when it began to be displaced by faceting; but its vogue was revived in art nouveau jewelry. Cabochons are of various shapes, usually circular or oval, but sometimes rectangular or triangular.

There are four basic forms:

On rare occasions a cabochon is cut with a flat surface or 'table' on the top of the dome. Among the stones that are often cut as cabochons are the carbuncle (almandine), cats-eye, tiger's-eye, and amazonite. The stones so cut are said to be cut en cabochon.

A cabochon or cabachon is a gemstone which has been shaped and polished as opposed to facetted. The resulting form is usually a convex top with a flat bottom. Cutting "en cabochon" is usually applied to opaque gems, while facetting is usually applied to transparent stones. Hardness is also taken into account as softer gemstones with a hardness lower than 7 on the Mohs hardness scale are easily scratched, mainly by silicon dioxide in dust and grit. This would quickly make translucent gems unattractive. Instead they are polished as cabochons, making the scratches less evident.

The one notable exception to this is the case of asteriated stones such as star sapphires and chatoyant stones such as cat's eye chrysoberyl, where a domed cabochon cut is used to show the star or eye, which would not be seen in a facetted cut.

The usual shape for cutting cabochons is an oval. This is because the eye is less sensitive to small asymmetricalities in an oval (as opposed to a round shape), and because the oval shape, combined with the dome, is attractive.

The normal procedure is to cut a slab of the rough rock, then to stencil a shape from a template. The slab is then trimmed to near the marked line using a diamond blade saw - called a trim saw, and sometimes followed by nibbling to the line. The purpose of nibbling is to speed the shaping of the material when using silicon carbide grinding wheels. Most modern lapidary workshops and production facilities have moved away from silicon carbide to diamond grinding wheels or flat lap disks.

Once the piece is trimmed and nibbled, it is usually mounted on a handle to assist manipulation. This procedure is called dopping: It is normally done by adhering the stone with wax onto a length of wooden dowel called a dop stick. The piece is then ground to the template line, the back edges may be bevelled, and finally the top is sanded and polished to a uniform dome.