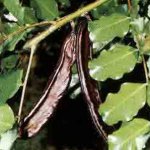 The unit of weight for a diamond or other gemstone and also for a pearl. Formerly it had various values, ranging from 0.1885 to 0.2135 grams, in different countries and at different times (so that the weights stated for some old stones must be viewed with caution). But now the International Metric Carat (since 1 April 1914 standard in Great Britain, most European countries and the United States) is 200 mg. (3.086 grains troy), or one-fifth of a gram (28 g. equaling about I oz). Fractional weights for metric carats are usually expressed decimally, but fractionally for old carats. The term 'carat(s)' used alone now means metric carat(s). The carat is divided into 4 GRAINS, especially in measuring the weight of pearls, and also into points for measuring diamonds.

The word came to English from French, derived from the Greek kerátion , “fruit of the carob”, via Arabic qi-ra-t and Italian carato. The Latin word for carat is siliqua. In past centuries, different countries each had their own carat unit, all roughly equivalent to the mass of a carob seed. These units were often used for weighing gold.

Carob seeds were used as weights on precision scales because of their reputation for having a uniform weight.However, a 2006 study found carob seeds to have as much variation in their weights as do other seeds, though it seems that it is easier than with other seeds to recognize particularly large or small specimens and remove them. Thus, the carob seed was used as a weight not because it was naturally more uniform in weight, but because it could be more easily standardized.

The measure for the fineness of gold and gold alloy, expressed as a number, Out of 24 parts by weight, of parts of gold in the alloy, e.g. '24 carat' means pure gold, '14 carat' means 14/24ths gold in the alloy. (A carat has sometimes erroneously been stated to be 1/24th of an ounce or of a pound troy.) Most jewelry uses gold of 14 or 18 carats, 24-carat gold being used only for very fine work. In Continental marking, gold fineness is expressed as a decimal, e.g. 75% fine 18 carat 0.750 gold. The term 'carat' is derived from the Arabic qirat, a bean originally used as a measure of the weight of gold. It is sometimes spelled 'karat' in the United States when it applies to the measure of fineness of gold, to distinguish it from the term 'carat' as applied to the weight of gemstones.