Looking for an antique or vintage emerald ring? Maybe some emerald engagement rings? Adin has some exquisite examples set with emerald. 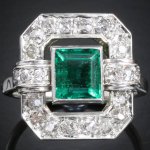 Emerald, a variety of beryl, and one of the rarest and most valuable of the Precious Stones. It is green, ranging from pale to dark, the most valuable being very dark 'velvety green'; the colour is derived from the presence of traces of chromium.

Flawless stones are extremely rare, and most specimens contain inclusions, called the Jardin (French for "garden") of the emerald.

It is not affected by changes of light, as is a sapphire. Other, inferior, stones that are similar in appearance are green corundum, green tourmaline, demantoid, diopside, chrysolite, and hiddenite.

The word "emerald" was derived from French "esmeraude" which in turn goes back via Latin to the Greek root "smaragdos", meaning simply "green gemstone". The ancient Incas and Aztecs, in South America where the best emeralds are still found today, worshipped them as a holy stone. However, probably the most ancient occurrences which were known are located near the Red Sea where mines were already exploited by Egyptian Pharaohs between 3000 and 1500 B.C.. The mines gained fame under he name of "Cleopatra's Mines", but were already exhausted when they were rediscovered.

Emeralds were used in abundance by the Indians in Columbia before the Spaniards arrived c. 1538. The finest, dark green, were found in the Muzo Mine in Columbia by the Spaniards c. 1587, and these, known as old mine emeralds, were used as rounded pebbles called 'Chibcha stones', many of which were shipped to India and Persia; the next finest emeralds, of yellow-green colour, were from the El Chivor Mine (closed in 1625 but reopened in 1920). Other important sources have been India, the Ural Mountains of Russia, Rhodesia (now Zimbabwe) from 1955 (there called 'Sandawana emeralds' and being usually under one carat, but of good colour and free of inclusion), Zambia (from 1974), and Brazil (the stones having open veins that were filled with oil to improve the colour until the oil evaporated). In antiquity they were merely polished and drilled as beads or notched to be suspended (as still done in India and the Near East). In the West the stone is usually step cut in rectangular shape; but some are cut en cabochon (especially those that are chatoyant) or as brilliant.

What is surprising with emeralds is that, in spite of the beauty of the green they feature, inclusions are allowed, and nevertheless, in top qualities fine emerald are even more valuable than diamonds.

Large emeralds with no inclusions and of the better color are so rare that if you had one it'd be more expensive than a diamond. Therefore most emeralds will have inclusions - traces of an active history of origin characterising the gemstone. Fine inclusions, after all, do not diminish the value; on the contrary. An emerald of deep, vivid green with inclusions will be valued higher than an inclusion-free stone of paler color. Almost endearingly, experts call the many crystal inclusions or fissures which are so typical for this gemstone a "jardin". The tender green plant-like structures in the emerald garden are considered as identifying characteristics of a naturally grown emerald.

Many centuries ago in the Veda, the ancient sacred writings of Hinduism, there was written down information on the valuable green gemstones and their healing power: "emeralds promise good luck", or "The emerald enhances your well-being". It does not come as a surprise, then, that the treasure chests of Indian Maharajas and Maharanis contained most wonderful emeralds.

One of the largest emeralds in the world is the "Mogul Emerald". It goes back to the year 1695, weighs 217.80 carats and is about 10 cm high. One side is inscribed with prayers, on the other side there are engraved opulent flower ornaments. The legendary emerald was auctioned off at Christie's of London for 2.2 million US dollars to an anonymous buyer.

Emeralds have been coveted ever since ancient times. Some of the most famous emeralds can therefore be admired in museums and collections. For example, The New York Museum of Natural History not only shows a cup from pure emerald which was owned by Emperor Jehingar, but also a Colombian emerald crystal weighing 632 carats. The collection owned by the Bank of Bogota contains no less than five valuable emerald crystals weighing between 220 and 1796 carats. Also in the Irani State Treasure there are guarded some wonderful emeralds, among them the tiara of ex-Empress Farah.

(Not that we necessarily promote or believe the above power and/or health claims, but we think they make for interesting conversation. We also would like to emphasize that buying a precious stone for any of such reasons is one's own responsibility and Adin can not be held accountable if the obtained result is not as desired.)

Synthetic emeralds and other emerald imitations

Synthetic emeralds have been produced since 1930 (in antiquity 1946), as well as imitations in glass, which include flaws and inclusions but which are distinguishable by lack of dichroism. A deceptive practice to improve the appearance of an emerald of poor colour is painting its back and mounting it in a closed setting for concealment.

We can offer you the finest in Antique and Vintage jewelry. The place to be if you want to buy an emerald ring. Browse our catalogue and find some exquisite examples of engagement rings and eternity bands.