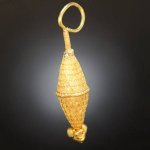 See a real Etruscan piece of jewelry we have in stock or see our: Neo-Etruscan jewelry.

Articles of jewelry (usually of gold) made with great skill and artistry in Etruria (now western Tuscany). The Etruscans were a non Italic people whose culture, based on Greek culture, influenced the Romans from the 7th century BC until the 5th century BC, when they were invaded by the Gauls and again in the 4th and 3rd centuries BC until they were overcome by the Romans.

The jewelry is of two periods: (1) the Early Etruscan Period, from the 7th century BC to the 5th, when the Etruscans excelled in developing their own characteristic styles and methods of workmanship, producing many pieces of technical perfection and great variety; and (2) the Late Etruscan Period, 4th-3rd centuries BC, when the work was of a coarser quality. During the Early Etruscan Period they developed the art of granulated gold, using finely grained gold by a process only recently rediscovered, and making such articles as fibulae (some ornamented with animal figures in the round), bracelets, earrings, and necklaces. They also made articles in filigree having openwork patterns without a backing, and often used colored beads from Phoenicia, inlay and enameling.

In the Late Etruscan Period the decoration became meagre, mainly embossed work on convex surfaces rather than the earlier granulated and filigree work; the pieces included bracelets (some made as wide bands) and now finger rings, bullae, and burial wreaths. The many finger rings were often made with a scarab or a long, oval bezel engraved or set with a gemstone. Most of the pieces known today have been found in Etruscan tombs and cemeteries.

After c. 250 BC Etruscan jewelry continued to be made but was purely in Hellenistic style. In the 19th century the styles of ancient Etruscan jewelry were reproduced by Fortunato Pio Castellani.