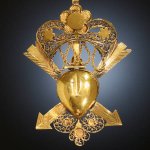 This is in fact thin golden wire plain, twisted or plaited into refined motifs. This technique demands very high skills and precision from the maker.

Filigree (formerly written filigrann or filigrane; also known as telkari, the name given in Anatolia, meaning "wire work", and cift-isi, pronounced chift-ishi, meaning "tweezers work") is a jewel work of a delicate kind made with twisted threads usually of gold and silver or stitching of the same curvy motif, to suggest lace, and is most popular in French fashion decoration from 1660 to the present. It is now exceedingly common for ajoure jewellery work to be mislabelled as filigree. While both have many open areas, filigree involves threads being soldered together to form an object and ajoure involves holes being punched, drilled, or cut through an existing piece of metal.

The word, which is usually derived from the Latin filum, thread, and granum, grain, is not found in Ducange, and is indeed of modern origin. According to Prof. Skeat it is derived from the Spanish filigrana, from "filar", to spin, and grano, the grain or principal fibre of the material.

Though filigree has become a special branch of jewel work in modern times, it was anciently part of the ordinary work of the jeweler. A.Castellani states, in his "Memoir on the Jewellery of the Ancients" (1861), that all the jewelry of the Etruscans and Greeks (other than that intended for the grave, and therefore of an unsubstantial character) was made by soldering together and so building up the gold rather than by chiselling or engraving the material.

The wire was usually of gold or silver (sometimes of bronze in late Roman work), and was used to form a delicate and intricate design.

It was executed in two styles

The latter method is found on European jewelry until the 15th century, and was revived in England in the Victorian era, being used especially for openwork portions of necklaces and brooches and also for finger rings having a gemstone encircled by such filigree or the shoulders decorated with it.

Filigree was also used on some Jewish marriage rings and on some Spanish and Portuguese peasant jewelry. In England it is found on some mourning jewelry, laid over locks of hair or made into a monogram. The openwork filigree is still popular in Portugal, the Ligurian coast of Italy, and Norway, especially on inexpensive jewelry for the tourist trade. For filigree work with the space filled in with enamel or slices of gemstones.