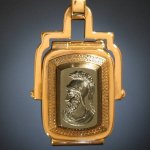 An iron ore that is found in many forms:

Hematite is blue-black, but when in fragments or powder it is blood-red (hence the name, from the Greek haema, blood), and when the stone is rubbed on an unpolished surface it leaves a red streak.

Hematite has been used in jewelry since Egyptian times, as a seal carved in intaglio, as a cameo on a signet ring (often depicting a warrior's head), as a cabochon set in a pendant or finger ring, and as beads strung in a bracelet or necklace (sometimes to imitate a black pearl).

Hematite is found as an inclusion in some aventurine quartz and sunstone. Sometimes called 'iron glance', owing to its metallic luster.