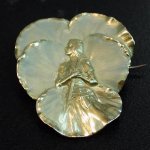 Like the gods about whom Homer sang, the Saints in heaven have been known to take a partisan interest in mortal politics - as when, in 4126 Saints Catherine, Margaret and Michael decided to assist the Valois party of Charles of Orlians against his rivals the Burgundians and their English allies.

It was their wish that the dauphin Charles of France became the king of France. They chose as their instrument of policy a teenage farm girl named Jeanne d'Arc, to whom they appeared and spoke. Thanks to many hundreds of books and plays and movies, everyone knows what happened next: Jeanne, clad in white armor, rode at the head of the dauphin's army, while he himself remained prudently at the rear.

Because she would not deny her Saints, inquisitors found her guilty of heresy, and turned her over to the civil authorities. Because she had opposed their occupation of her country, the English concluded she was a witch. She was burned at the stake on May 30 1431. She was almost nineteen years old.