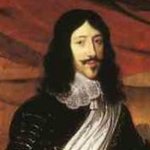 Born September 27, 1601, at the Palace of Fontainebleau, Louis was the first child of Henri IV and Marie de Medicis. He ascended to the throne at age nine after the assassination of his father. His mother acted as Regent for the minor Louis until he reached the age of sixteen, when Louis took the reins of government into his own hands. This effectively removed Concino Concini, who had greatly influenced Marie's policymaking, from a position of power. Under Louis' rule, the Bourbon Dynasty continued to flourish, but the question of freedom of religion continued to haunt the country.

The brilliant and energetic Cardinal Richelieu (Armand du Plessis de Richelieu) played a major role in Louis XIII's administration, decisively shaping the destiny of France for the next 25 years. As a result of Richelieu's work, Louis became one of the first exemplars of an absolute ruler. Under Louis XIII, the Hapsburgs were humiliated, a powerful navy was built, the French nobility was firmly kept in line behind their king, and the special privileges granted to the Huguenots by his father were canceled. He had the port of Le Havre modernized.

The king also did everything to reverse the trend for the promising artists of France to work and study in Italy. Louis commissioned the great artists Nicolas Poussin and Philippe de Champaigne to decorate the Luxembourg Palace. In foreign matters, Louis XIII organized the development and administration of New France, expanding the settlement of Quebec westward along the Saint Lawrence River from Quebec City to Montreal.

He was married to a Hapsburg, Princess Anne of Austria (1601-1666), daughter of king Philip III of Spain. Their marriage, like Franco-Austrian relationships, was never a happy one, and for most of it they lived apart. However, fulfilling her duty, after twenty years of marriage, Anne finally gave birth to a son in 1638.

After Louis' death on May 14, 1643, his wife Anne acted as regent for their five-year-old son, Louis XIV.