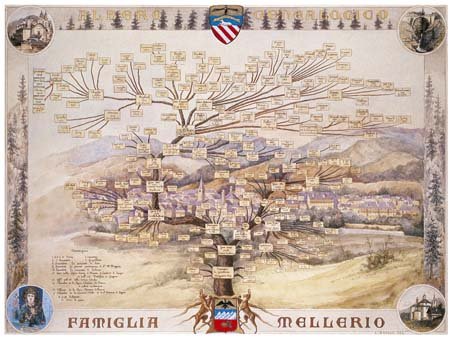 One of the inabitants of Vilette, a small village in Lombardy, Jacques Pido had obtained the exclusive right to sweep the chimneys of the Palais du Louvre. While coming down a flue, one of his young apprentices surprised a conversation plotting to assassinate the young King Louis XIII. Informed by the Consuls of the Lombardy Community, including Jean-Marie Mellerio, the Regent, Marie de Medicis, decided "for services rendered" to grant her protection to the inhabitants of three villages in Lombardy. By decision of the King's Counsellor, dated October 10, 1613, she granted her "protégés" the unique privilege of plying they trade in Paris and throughout the realm without having to submit to the administrative restrictions generally applied. All the Kings of France were to renew these decrees, making the Mellerio, and the other families from the villages of the Vigezzo valley privileged citizens within the realm. The history is still going on through centuries....

Although some of them had been prosperous traders-jewellers towards the end of the 17th century, it was at the beginning of the 19th century that the Mellerio made their mark in Paris, by founding stable commercial establishments.Jean-Marie Mellerio had 10 children. He brought back to Paris, the ninth, Jean-Baptiste. When he was 15, he decided to settle down the Versaille's castle, where he was so clever in doing his business to attract Queen Marie-Antoinette. Amused, she left Jean-Baptiste go inside the Castel and sell small items. Years later, Jean-Baptiste Mellerio, left the district of the "Rue des Lombard" to settle at 20, rue Vivienne, under the sign "Mellerio-Meller. The "iron crown" where he profited from the custom of Empress Josephine.

However, it was another Mellerio, François Mellerio (1772-1843), who created the foundations of the current house, MELLERIO dits MELLER. Set up at 4, rue du Coq-Saint-Honoré (today rue Marengo), his establisment rapidly grew under the Empire, thanks to Empress Josephine who bought small items from him and attracted in her wake the Emperor's family, the new nobility and the old aristocracy standing together. In 1815 at the end of the Empire, he transferred the house to 22, rue de la Paix and in the following year went into partnership with his brother Jean-Jacques. Highly prized by the Orleans family, his most important customer, Mellerio was elevated, after the accession of the Duc d'Orléans to the throne in 1830, to the rank of official supplier to Queen Marie-Amélie, King Louis-Philippe and the royal family.

During the period of the economic crisis caused by the 1848 Revolution, the two brothers thought up the project of setting up an establissement in Spain, which was accomplished in 1850 with the opening of a shop in Madrid "Mellerio-Hermanos" which rapidly received large orders from Queen Isabelle II and the grandees of Spain. The Second Empire was one of the finest periods for the Mellerio house in Paris. Worthy heirs of their forebears François (born in 1943) and Olivier (born in 1945) the current managers are carrying on this high level of know-how, which warrants that the House is a member of the Comité Colbert and the High Jewelers of France.