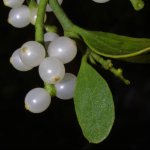 The popular belief that mistletoe brings good luck to a house is widely spread in the United Kingdom but also in Germany and France. People used to let a branch with white berries hang in their house from one Christmas till the next when they replaced it with a fresh branch. Also as carrier of good luck and fortune the mistletoe is used for all sorts of wedding traditions. To one of those belongs the old English tradition that girls let themselves be kissed at Christmas by men under hung mistletoe.

In the winter the golden-green plant emerges through the leafless branches of its host tree as a triumphant little green sphere shaped bush with white berries. It's like the half parasite unites the live between heaven and earth. This phenomenon must have impressed the Old civilizations. Therefor it is not surprising that for the Celts and Old Germans, the mistletoe was loaded with symbolic of Life's victory over Death, zest for living and rebirth. The symbol of the plant is even intensified when being associated with the symbol of the oak, king of vegetation and symbol of power. The union of mistletoe and oak thus became the symbol of wisdom, knowledge, light and power.

Together with the pine, spruce and holly the mistletoe is evergreen and belongs to the customary Christmas and winter emblems.

As result of the Balder myth (see: Mistletoe in legends, sagas and fairytales) the mistletoe has the meaning of "I will conquer all hindrances". But it is also used in the meaning of sweet kisses: "A flood of kisses I will send thee"


Mistletoe in legends, sagas and fairytales

The mistletoe appears in the Balder myth. According to the story Frigg had the elements, animals and plants swear that they would never hurt her son Balder. Balder was the helpful, eloquent, shining and somewhat naive god of lights. Frigg however, forgot to ask the young sprout of the mistletoe, which was growing in the east of the Walhalla. This was discovered by Loki, Balder's jealous' brother, which used this knowledge in a subtle way. He asked their blind brother Hoder to shoot an arrow (with a point made from the wood of mistletoe). Hoder, completely innocent, did as Loki asked and lethally hit Balder. The gods were dumbfounded and sad and couldn't revive Balder. They decided to organize a solemn funeral. They made a funeral pyre aboard a ship (the Hringhorne), and Thor, god of lightning and inauguration, blessed it with his hammer. Finally they put Balder's body on the pyre together with that of his wife Nanna (who died of grieve), his horse and ring and they lit everything. Thereupon Balder stayed in the "empire of death" - Hell. And from that time on the world didn't know any real joy, justice and beauty, and would degenerate to the fatal moment of decay or decomposition. Only after the big world fire Balder would re-appear in a renewed harmonious world. (Loki got punished for his crime.)