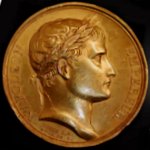 Emperor of the French, who consolidated and institutionalized many reforms of the French Revolution. One of the greatest military commanders of all time, he conquered the larger part of Europe and did much to modernize the nations he ruled.

Napoleon was born on August 15, 1769, in Ajaccio, Corsica, and was given the name Napoleone (in French his name became Napoleon Bonaparte). He was the second of eight children of Carlo (Charles) Buonaparte and Letizia Ramolino Buonaparte, both of the Corsican-Italian gentry. No Buonaparte had ever been a professional soldier. Carlo was a lawyer who had fought for Corsican independence, but after the French occupied the island in 1768, he served as a prosecutor and judge and entered the French aristocracy as a count.

Through his father's influence, Napoleon was educated at the expense of King Louis XVI, at Brienne and the école Militaire, in Paris. Napoleon graduated in 1785, at the age of 16, and joined the artillery as a second lieutenant.

After the Revolution began, he became a lieutenant colonel (1791) in the Corsican National Guard. In 1793, however, Corsica declared independence, and Bonaparte, a French patriot and a Republican, fled to France with his family. He was assigned, as a captain, to an army besieging Toulon, a naval base that, aided by a British fleet, was in revolt against the republic. Replacing a wounded artillery general, he seized ground where his guns could drive the British fleet from the harbor, and Toulon fell. As a result Bonaparte was promoted to brigadier general at the age of 24.

In 1795 he saved the revolutionary government by dispersing an insurgent mob in Paris. In 1796 he married Joséhine de Beauharnais, the widow of an aristocrat guillotined in the Revolution and the mother of two children.