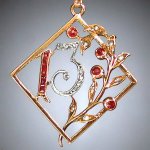 Number 13 is the second happy prime, following 7, and the rethorical 1.

In Sikhism, the number 13 is considered a special number since 13 is tera in Punjabi, which also means "yours" (as in, "I am yours, O Lord"). The legend goes that when Guru Nanak Dev was taking stock of items as part of his employment with a village merchant, he counted from 1 to 13 (in Punjabi) as one does normally; and thereafter he would just repeat "tera", since all items were God's creation. The merchant confronted Guru Nanak about this, but found everything to be in order after the inventory was checked. April 13 also usually turns out to be Vaisakhi every year, which is the Sikh New Year and the major Sikh Holiday.

In Italy, 13 is also considered to be a lucky number.

Colgate University also considers 13 to be a lucky number. They were founded in 1817 by 13 men with 13 dollars, 13 prayers, and 13 articles. (To this day, members of the Colgate community consider the number 13 a good omen.) In fact, the campus address is 13 Oak Drive in Hamilton, NY and the all men a capella group is called the Colgate 13.

From Classical antiquity, the number thirteen has been regarded as unlucky.

During a procession, Philip of Macedon set his own statue among those of the twelve great Olympian gods and was assassinated shortly afterwards in the theatre. Thirteen persons, Christ and his apostles, celebrated the Last Supper. The Kabbalah lists thirteen spirits of evil. The thirteenth chapter of the Book of Revelation is that describing Anti-Christ and the Beast. And yet, in classical antiquity, the thirteenth member of a group was regarded as the most powerful and the most exalted. Such is true of Zeus among the twelve Olympians, among whom he sits or whom he leads, making a thirteenth who, according to Plato and to Ovid, is distinguished by his higher standing from the rest. Odysseus was the thirteenth member of his crew and escaped being eaten by the Cyclops.

In Allendy's system of numerological symbolism, this number stands for a principle of activity, three operating within the unity of the complete decade which contains it and which consequently restricts its range. Thirteen would correspond to an organized and dynamic system, but one, which was predetermined and particular rather than universal. Schwaller, too, interprets it as 'a generative force for good or ill'. Through its static (the group often) and its dynamic (the group of three) limitations, thirteen displays development doomed to death, the culmination of a power, since the latter is itself restricted, 'regularly thwarted effort'.

Generally speaking, thirteen, as an eccentric, marginal and erratic element, is separated from the normal order and rhythm of the universe. From the cosmic point of view, thirteen's undertakings are generally bad, since the activities of the creature can only be blind and inadequate for they do not harmonize with the laws of the universe. They may serve for individual development, but they disturb the government of the macrocosm and trouble its rest. They are a unity shaking the balance of the different interconnections in the universe (12 + 1).

In Ancient Mexican astronomy, calendars and theology, thirteen was a basic sacred number. In the Popol-Vuh, there are 'thirteen gods' and 'the thirteen-god'; there are twelve stars and the Sun at its zenith; while the twelve rain-gods are personifications of the thirteenth who is also the first, or great sky-god. The Aztecs considered thirteen to be the number of time itself, the figure which stood for the completion of a temporal series. It was associated with the figure fifty-two, the Aztec age (13 x 4), the 'bond of the years' during the course of each of the Aztec 'Suns'. The first and fourth of these Suns each lasted for 676 years and were the most perfect since they comprised these two numbers only - 13 x 52 = 676. An Aztec week, too, lasted thirteen days.

The thirteenth major arcanum in the Tarot, Death, does not mean an end, but a fresh start after the completion of a cycle - 13 = 12 + 1 - and to this, generally speaking, the number would correspond. It does, however, carry with it the pejorative hint of being less a completely fresh birth than starting the same thing all over again. It would, for example, stand for Sisyphus' unceasing efforts to roll the rock to the top of the hill or the cask which the Danaids could never fill to the brim.

Fear of the number 13 is termed triskaidekaphobia.