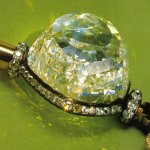 The 189.62-carat Orlov is one of the largest and most historically outstanding diamonds in the world, and one of the chief treasures in the Russian Diamond Fund in Moscow. It resembles half of a small egg, rose cut on top, almost flat but faceted on the bottom, and measures approximately 35mm x 32mm x 27mm.

Stories of the Orlov's history differ. Many authorities and writers believe that it is the Great Mogul, which was seen in India by Tavernier, the French traveler and jeweler, but that it has been lost to history since that time. If this is true, it was probably part of the 1739 Nadir Shah plunder that was taken during the pillage of Delhi. It is probable that it was stolen after Nadir's assassination and eventually found its way to Amsterdam by devious ways, including theft and murder.

In a 19th-century drawing of the Orlov Diamond the stone's base is somewhat irregular, rather than the oval-like stone that Tom R. Barbour's cutting instructions call for, which appeared in his famous diamond replica series in Lapidary Journal in the early-1960's. According to another account, the great diamond was originally the eye of the Hindu god Sri-Ranga in a temple in Srirangem, District of Trichonopoly, about one hundred miles from the southern tip of India. It was stolen from the temple by a French soldier, who had deserted the army after fighting in the Carnatic Wars and who fled to Madras and sold the stone to a sea captain for $10,000.

The captain, in turn, is said to have sold it in London for $60,000 to a Persian merchant named Khojeh, who took it to Amsterdam. It was there, in 1775, that the Russian nobleman, Count Gregory Orlov, bought the big egg-shaped gem for $450,000 and presented it to Empress Catherine II, in an attempt to regain his place as her favorite. She accepted the gift but refused to reinstate Orlov to his former powerful position in the Court.

Catherine never wore the Orlov, but had it mounted in the top of the double eagle in the Imperial Scepter, the form in which it exists today in the Kremlin Museum. The name is also sometimes spelled Orloff or Orlow. Alternate names sometimes encountered are Amsterdam, Lasarev, or Septer.