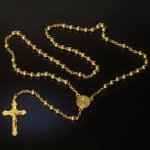 In Monastic Houses, monks were expected to pray the Divine Office daily in Latin, the liturgical language of the Roman Catholic Church. In some Houses, lay brothers who did not understand Latin or who were illiterate were required to say the Lord's Prayer a certain number of times per day while meditating on the Mysteries of the Incarnation of Christ. Since there were 150 Psalms, this could number up to 150 times per day. To count these repetitions, they used beads strung upon a cord and this set of prayer beads became commonly known as a Pater noster, which is the Latin for "Our Father".

Lay people adopted this practice as a form of popular worship. The Paternoster could be of various lengths, but was often made up of 5 “decades” of 10 beads, which when performed three times made up 150 prayers. Other Paternosters, most notably those used by lay persons, may have had only had 10 beads, and may have also been highly ornamented. As the Rosary (ring of flowers) incorporating the Hail Mary prayer became more common, it was often still referred to as a Paternoster.