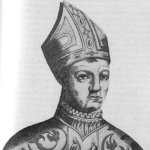 Born about in 1370 as Baldassare Cossa, he was one of the seven cardinals who deserted Pope Gregory XII of Rome in May 1408 and supported Pope Benedict XIII of Avignon. Cossa became the leader of the Council of Pisa that was convened and when the two above mentioned Popes were deposed he conducted the election of Pietro Philarghi who was crowned as Alexander V and was completely under his influence.

When Alexander V died on 3 May 1410 in Bologna Cossa was elected two weeks later. Another week later (on May 24, 1410 to be precise) Cossa was ordained priest and the following day was consecrated and crowned Pope. He took on the name of John XXIII. His papacy would not be a long one either. He was forced to abdicate to end the Church’s schism and was formerly deposed on 29 May, 1415.