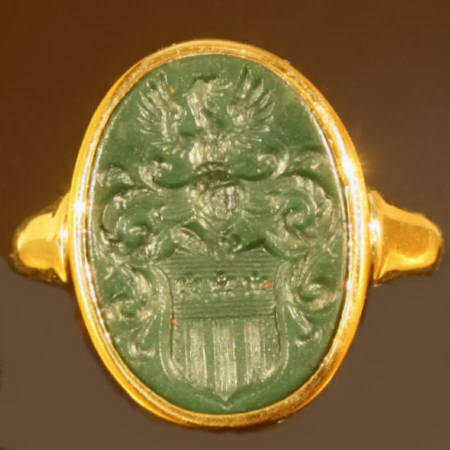 A type of finger ring made with a signet or seal and used from earliest times for the utilitarian purpose of authenticating a document by impressing the signet, or later for ornamental wear. In Egypt such rings were in the form of the scarab ring or a ring with a gemstone cut in intaglio.

In Greece the signet ring was usually a gold hoop (sometimes hollow and filled with mastic) with a flat bezel engraved with a signet or set with an engraved gemstone. Roman signet rings were large and ornate, often with the seal engraved on a gemstone. Anglo-Saxon rings were more severe, roughly engraved. But medieval signet rings were very ornately decorated, some having engraved devices, e.g. animals, coats of arms, distinctive marks and were often used by a messenger as a credential.

In the 18th century the need for seals was less but signet rings were used as ornamental pieces, especially those with an engraved gemstone, as well as many with cameo or intaglio seals by Wedgwood and Tassie. From the 19th century signet rings were mainly simple gold bands having an intaglio initial or monogram on the flat bezel, or having a raised ornamental initial or monogram, and many were mass produced.