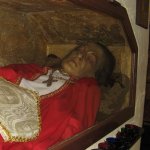 The Redemptorist Order relentlessly promotes devotion to this Saint, "invoking his powerful assistance against the forces of evil which attack the sanctity of Marriage and the dignity of Mother-hood," as it says in the Constitution of the League of Saint Gerard.

Born near Naples in 1726, Gerard was in his youth properly devoted to his own (widowed) mother, whom he supported by his work as a tailor's apprentice. (He sometimes supplemented the family larder with miraculous loaves of bread donated to the pious lad by a statue of Our Lady.) Because Gerard was both tubercular and simpleminded, the Redemptorists were at first unwilling to accept him. "A useless brother," he was called. But the order's leader and founder, Saint Alphonsus Mary de'Liguori, recognized in Gerard that rare and highly useful thing, a miracle worker-someone who could (for example) cause food and/or money to materialize and/or multiply.

There was ample eyewitness testimony at the time of his canonization proceedings that Gerard could heal the sick, be in two places at once, become invisible at will, read minds, fly through the air, and walk on water. All of these abilities are (come to think of it) expected of your average mother-but Gerard's special Patronage of them arises from one particular incident. Once, when visiting friends, he left his handkerchief behind. The daughter of the house picked it up to return it to the Saint, but he said, "Keep it, it may be useful to you." Years later, the young woman was dying in childbirth when she remembered Gerard's hanky. It was brought to her, she gripped it and prayed-and lived, the mother of a healthy infant. Although he was a laybrother, not a priest, Gerard was the spiritual director to several communities of nuns.

In 1754, an ex-novice, Neria Caggiano, accused Our Saint (the Patron of mothers!) of having taken scandalous liberties with her person in the course of his ministry. She was, naturally, lying.