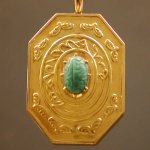 The creator-god, according to early Heliopolitan cosmology; assimilated with Atum and Ra. The Egyptian root kheper signifies several things, according to context, most notably the verb "to create" or "to transform", and also the word for "scarab beetle".

Several species of the dung beetle, most notably the species Scarabaeus sacer (often referred to as the sacred scarab), enjoyed a sacred status among the ancient Egyptians.

The hieroglyphic image of the beetle represents a trilateral phonetic that Egyptologists transliterate as xpr or h(pr and translate as "to come into being", "to become" or "to transform". The derivative term xprw or h(pr(w) is variously translated as "form", "transformation", "happening", "mode of being" or "what has come into being", depending on the context. It may have existential, fictional, or ontologic significance.

The scarab was linked to Khepri ("he who has come into being"), the god of the rising sun. The ancients believed that the dung beetle was only male in gender, and reproduced by depositing semen into a dung ball. The supposed self-creation of the beetle resembles that of Khepri, who creates himself out of nothing. Moreover, the dung ball rolled by a dung beetle resembles the sun. Plutarch wrote: "The race of beetles has no female, but all the males eject their sperm into a round pellet of material which they roll up by pushing it from the opposite side, just as the sun seems to turn the heavens in the direction opposite to its own course, which is from west to east."

The ancient Egyptians believed that Khepri renewed the sun every day before rolling it above the horizon, then carried it through the other world after sunset, only to renew it, again, the next day. Some New Kingdom royal tombs exhibit a threefold image of the sun god, with the beetle as symbol of the morning sun. The astronomical ceiling in the tomb of Ramses VI portrays the nightly "death" and "rebirth" of the sun as being swallowed by Nut, goddess of the sky, and re-emerging from her womb as Khepri.

The image of the scarab, conveying ideas of transformation, renewal, and resurrection, is ubiquitous in ancient Egyptian religious and funerary art.

Excavations of ancient Egyptian sites have yielded images of the scarab in bone, ivory, stone, Egyptian faience, and precious metals, dating from the Sixth Dynasty and up to the period of Roman rule. They are generally small, bored to allow stringing on a necklace, and the base bears a brief inscription or cartouche. Some have been used as seals. Pharaohs sometimes commissioned the manufacture of larger images with lengthy inscriptions, such as the commemorative scarab of Queen Tiye. Massive sculptures of scarabs can be seen at Luxor Temple, at the Serapeum in Alexandria and elsewhere in Egypt.

The scarab was of prime significance in the funerary cult of ancient Egypt. Scarabs, generally, though not always, were cut from green stone, and placed on the chest of the deceased. Perhaps the most famous example of such "heart scarabs" is the yellow-green pectoral scarab found among the entombed provisions of Tutankhamen. It was carved from a large piece of Libyan desert glass. The purpose of the "heart scarab" was to ensure that the heart would not bear witness against the deceased at judgement in the Afterlife. Other possibilities are suggested by the "transformation spells" of the Coffin Texts, which affirm that the soul of the deceased may transform (xpr) into a human being, a god, or a bird and reappear in the world of the living.

One scholar comments on other traits of the scarab connected with the theme of death and rebirth: "It may not have gone unnoticed that the pupa, whose wings and legs are encased at this stage of development, is very mummy-like. It has even been pointed out that the egg-bearing ball of dung is created in an underground chamber which is reached by a vertical shaft and horizontal passage curiously reminiscent of Old Kingdom mastaba tombs."

In contrast to funerary contexts, some of ancient Egypt's neighbors adopted the scarab motif for seals. The best-known of these being Judean LMLK seals (8 of 21 designs contained scarab beetles), which were used exclusively to stamp impressions on storage jars during the reign of Hezekiah.

The scarab remains an item of popular interest thanks to modern fascination with the art and beliefs of ancient Egypt. Scarab beads in semiprecious stones or glazed ceramics can be purchased at most bead shops, while at Luxor Temple a massive ancient scarab has been roped off to discourage visitors from rubbing the base of the statue "for luck".