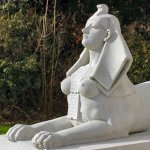 The sphinx in is originally an Egyptian mythological figure, depicted as a recumbent lion with a human head to which the ancient Greeks applied their own name for a female monster, the "strangler" one of their many hybrid creatures.

A hybrid is a composite of two or more species of animal and/or human. Strange as they may appear, the Greeks were endlessly fond of fabricating these creatures, one will recognize hybrids in the earliest myths and legends, not to mention inhabiting numerous works of art. For the Greeks especially, these beings of the imagination must have had great significance, in that they represented the uncivilized forces in nature that opposed mankind.

The seven most known hybrids are:

The Greek mythology tells us the story about Oedipus (a king from Thebe) and his confrontation with the Sphinx in his search for the truth. The Sphinx had the head and breasts of a woman, the body of a lion, the tail of a snake and the wings of an eagle. This monster asked all Thebetan travelers the enigmatic question: »which creature with a voice walks in the morning with four legs, in the afternoon with two and in the evening with three. The Sphinx destroyed everyone who answered incorrectly.

Are you wondering now what the correct answer was by which Oedipus destroyed the Sphinx?