*Use code: "202020" at checkout. Valid from Jan. 14th until Jan. 31st 2020. Not cumulative with this or other promotions, Not valid on already discounted items. Free shipping
We offer layaway, spread payments on the piece of your dreams. Ask us for details. Free insured shipping on all orders !!! 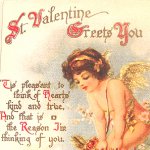 See our: love token jewelry or our mythological jewelry.

Saint Valentine (in Latin, Valentinus) is the name of several martyred saints of ancient Rome. Of the Saint Valentine whose feast is on February 14, nothing is known except his name and that he was buried at the Via Flaminia north of Rome on February 14. It is even uncertain whether the feast of that day celebrates only one saint or two or more saints of the same name. For this reason this liturgical commemoration was not kept in the Roman Catholic calendar of saints for universal liturgical veneration as revised in 1969. Traditional Roman Catholics continue to venerate St. Valentine on his feast day, February 14.

English eighteenth-century antiquarians Alban Butler and Francis Douce, noting the obscurity of Saint Valentine's identity, suggested Valentine's Day was created as an attempt to supersede the pagan holiday of Lupercalia. This idea has lately been contested by Professor Jack Oruch of the University of Kansas. Many of the current legends that characterise Saint Valentine were invented in the fourteenth century in England, notably by Geoffrey Chaucer and his circle, when the feast day of February 14 first became associated with romantic love.

One of the many legends:

Saint Valentine was beheaded for helping young lovers marry against the wishes of the mad Roman emperor Claudius. Before his execution, Valentine himself had fallen in love with his jailer's daughter. He signed his final note to her, "From Your Valentine", a phrase that withstood the test of time.

Valentine's day
where does it come from?

The most likely origin of the habits of Valentine's day is the old belief that birds starting to mate at February 14th. Specially in the Middle Ages this belief was widely spread. In the 14th Century Chaucer writes in Parliament of Foules: "For this was sent of Seynt Valentine's day, Whan every foul cometh ther to choose his mate."

There are researchers that hold the Roman Lupercalia-celebration as the possible origin of the habit to find a partner on Valentine's day. The god Lupercus was invoked to protect the Romans from the wolves that roamed the surrounding woods. At February 15th the Romans celebrated spring in honor of Lupercus. The night before the boys had to draw a raffle ticket on which there was the name of a girl. That girl would be their girl-friend for that year. Later the Lupercalia festival and Valentine's day were combined.

The sending of love letters at Valentine's day we already see in English and French literature in the late Middle Ages. Not only the message that was send got the name "valentine" but also the involved individuals.

"The rose is red,
The violet blue,
Carnation's sweet,
And so are you"

sounds the love poem written by Batsheba Everdeen, heroine in Thomas Hardy's Far from the Madding crowd. She writes this the evening before Valentine's day and seals it with a red seal with in it the words "Marry me". "So very idly and unreflectingly was this deed done. Of love as a spectacle Batsheba had a fair knowledge; but of love subjectively she knew nothing." sighs the author. The consequences of her thoughtless action we follow for the rest of the book.

There are many different legends surrounding the origin of Valentines Day. This year, we've opted to tell you the story that originates from the times of the Roman Emperor Claudius II

The legend contends that Valentine was a priest who served during the third century in Rome. When Emperor Claudius II decided that single men made better soldiers than those with wives and families, he outlawed marriage for young men -- his crop of potential soldiers. Valentine, realizing the injustice of the decree, defied Claudius and continued to perform marriages for young lovers in secret. When Valentine's actions were discovered, Claudius ordered that he be put to death.

According to the legend, Valentine actually sent the first 'valentine' greeting himself. While in prison, it is believed that Valentine fell in love with a young girl -- possibly his jailor's daughter -- who visited him during his confinement. Before his death, it is alleged that he wrote her a letter, which he signed 'From your Valentine,' an expression that is still in use today. Although the truth behind the Valentine legends is murky, the stories certainly emphasize his appeal as a sympathetic, heroic, and, most importantly, romantic figure. It's no surprise that by the Middle-Ages, Valentine was one of the most popular saints in England and France.

Finally, unspoken love is like keeping Valentine in prison. Offering a Valentine gift to the one you love would be like releasing him/her by defying Claudius II. Should you be looking for a way of defying Claudius II, just read the following explanation on the pendant in the next picture:

The coded message in the depicted pendant above is in French (the language d'amour par excellence!) and reads: '+ qu hier - que demain'. This is inspired by a beautiful and romantic French poem by Rosemonde Gérard called 'Les Vieux', which was intended for Edmond Rostand. It comes from the sentence 'Et, comme chaque jour je t'aime davantage, Aujourd'hui plus qu'hier et bien moins que demain' meaning:

'And because I love you more and more each day,
today more than yesterday
but less than tomorrow'

This jewel became very popular and is still considered today as a token of love.