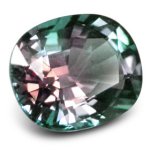 The stone was discovered there in 1830, the year Alexander II came of age; hence it was named after him. The variety now found in Sri Lanka (formerly Ceylon) changes from dark olive-green to brownish-red; it is larger than that of Russia (which is bluer) but less valuable. The stone is imitated by synthetic spinel and in great quantities by synthetic corundum (both incorrectly marketed as synthetic alexandrite); these are produced so as to show the changing colors.

According to a widely popular but controversial story, alexandrite was discovered by the Finnish mineralogist Nils Gustaf Nordenskiöld, (1792 -1866) on the tsarevitch Alexander's sixteenth birthday on April 17, 1834 and named alexandrite in honor of the future Tsar Alexander II of Russia. Sometimes, Nils Gustaf Nordenskiöld is confused with his son, Adolf Erik Nordenskjöld (1832–1901), also a famous Finnish geologist, mineralogist and arctic explorer who accompanied his father to the Ural Mountains to study the iron and copper mines at Tagilsk in 1853. However, Adolf Erik Nordenskjöld was only two years old when Alexandrite was discovered and only ten years old when a description of the stone was published under the name of Alexandrite for the first time.

Although it was Nordenskjold who discovered alexandrite, he could not possibly have discovered and named it on Alexander's birthday. Nordensljold's initial discovery occurred as a result of an examination of a newly found mineral sample he had received from Perovskii, which he identified as emerald at first. After the discovery of emeralds in the roots of an upturned tree, the first emerald mine had been opened in 1831, not long before Nordensjold had received this particular sample.

Confused with the high hardness however, he decided to continue his examinations. Later that evening, while looking at the specimen under candlelight, he was surprised to see that the color of the stone had changed to raspberry-red instead of green. Later, he confirmed the discovery of a new variety of chrysoberyl, and suggested the name "diaphanite" (from the Greek "di-", twi- and "aphanès", inapparent.

The name of the first person to actually find this stone has been lost in the mists of time. However, the first person to bring it to public attention, and ensure that it would be forever associated with the Imperial family was Count Lev Alekseevich Perovskii (1792-1856.)

The finest alexandrites were found in the Ural Mountains, the largest cut stones being in the 30 carat (6 g) range, though many fine examples have been discovered in Sri Lanka (up to 65 cts.), India (Andhra Pradesh), Brazil, Myanmar, and especially Zimbabwe (small stones usually under 1 carat (200 mg) but with intense color change). Overall, stones from any locale over 5 carats (1 g) would be considered extremely rare, especially gems with fine color change. Alexandrite is both hard and tough, making it very well suited to wear in jewelry.

The gem has given rise to the adjective "alexandritic", meaning any transparent gem or material which shows a noted change in color between natural and incandescent light. Some other gem varieties of which alexandritic specimens have been found include sapphire, garnet, and spinel.

Some gemstones described as lab-grown (synthetic) alexandrite are actually corundum laced with trace elements (e.g., vanadium) or color-change spinel and are not actually chrysoberyl. As a result, they would be more accurately described as simulated alexandrite rather than synthetic but are often called Czochralski Alexandrite after the process that grows the crystals.

Synthetic alexandrite is used as an active laser medium. Alexandrite laser crystals tend to be round, with a pale brown tint.