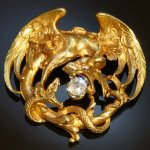 From circa 1830 the neo-styles followed each other:

There was another revival of the Neo-Egyptian in 1922 that coincides with the discovery of the tomb of King Tutankhamon. This revival was actually defined more in the Art-Deco style.

In a word the 19th Century was not very exiting from a design point of view. Towards the end of the century this became worse and even less defined with a variety styles mixed up all together. This was called eclectisism and for a long time was belittled. Lately however some people have started considering these as collectors items.