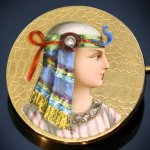 With neo-Egyptian style is not meant a new style direction in Egypt but a period of time in the Western World, when artists of various disciplines, finding their source of inspiration in the language of shapes of the ancient Egyptian civilization, dictated fashion. This ancient language of shapes was studied (thoroughly or just skin-deep), copied (in full or partial), interpreted (seriously or ingenuously) or used as theme to design and/or embellish "contemporary" objects of all sorts.

As is still common today, tourists that went to Egypt, brought back with them a lot of original artifacts, and sometimes not-so-original either. Like this, a lot of scarabs and other little souvenirs were brought back to Europe and given to local jewelers who turned these artifacts into jewelry.

We can recognize three neo-Egyptian styles:

The interest for artists to use the ancient Egyptian language of shapes was awoken by Napoleon Bonaparte's Egyptian Campaign. Between his European conquests, and before he became Emperor of the French, Napoleon Bonaparte conducted a campaign in Egypt. This attempt to exert French influence over Egypt was due to French economic and political needs but also personal needs of General Napoleon Bonaparte. Having seen the benefits of Britain's profitable colonies, it was Bonaparte's idea to invade Egypt, expel the ruling Mamelukes and establish a modern style of government friendly towards French ways. Within three months, he had raised and outfitted an expeditionary force of just under 40,000, which included, besides veteran troops from the Army of Italy, scientists and engineers. Going back to France after his Egyptian campaign, Bonaparte took with him a lot of ancient artifacts.

The first revival of the neo-Egyptian fashion took place around 1860 - 1870. Reason for this revival was the start of the construction of the Suez Canal in 1859 and the official opening of the Canal in 1869.

In 1847 after Muhammad's rule had ended, Egypt was still a semi-autonomous member of the Ottoman Empire and Cairo had less than 300,000 inhabitants. The third successor following Muhammad was his son Said, who played an instrumental role in the beginning construction of the Suez Canal in 1859. Ferdinand de Lesseps from France was employed to design and construct the canal. It was completed by Ismail, who had been educated in France and who acquired the direction of Baron von Haussmann, an architect from Paris, to redesign Cairo before the opening of the Canal. The Suez Canal was officially opened to commercial traffic on November 16, 1869, and was considered one of the most altering events in the history of Egypt, putting Egypt on the world's center stage. Many international dignitaries were present for the opening ceremony. The guest of honor was the Empress Eugenie, of France.

November 1922, the discovery and excavation of the tomb of King Tutankhamun was the inducement for the third neo-Egyptian fashion style. As in the two preceding neo-Egyptian periods, artists of all disciplines "borrowed" from this ancient language of shapes. With examples of extreme beauty but also extreme ugliness (and everything in between) the public's hunger for Egyptian motives was appeased.