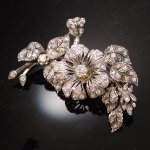 Flowers are part of our daily life. For virtually every event we have assigned a special flower. Flowers for love, church, church graveyard, marriage, etc. In the 16th century inn's use to have a branch or flower stalk as signboard which later often changed only into the name of a specific tree or flower. Many times one finds flower gardens in mythological sceneries. The allegoric use of flowers is uncountable: attributes for the springtime, the youth, the sunrise, the rhetoric, the virtue etc. Lots of countries carry a flower as national symbol: Hungary had the tulip and Scotland the thistle, etc.

Sometimes flower symbolism is narrowed to its tightest form: etiquette and superstition. Rules apply for the color and number of flowers one gives. In this (superstitious) believe it is not done to give black roses or yellow flowers; neither is it done to give 13 flowers; lovers give each other red roses, etc. Also the color of a flower has its own symbolism: white stands for innocence an purity but also for death; red for vitality and blood; blue for mystery and profound devotion and yellow for warmth, sun and gold. In the bible flowers often symbolise beauty and tenderness. And not to forget flowers remember us that all things, no matter how pretty, are subject to decay.

Flower symbolism is not as evident or simplistic as one might think, in fact one does need some effort to understand. Normally every flower has a different meaning but even different meanings are given to one flower. One of the common characteristics of flower symbolism is that it refers to the female or passive principle of the universal existence. Sometimes flowers, because of their 'star structure' symbolise the son.

When a flower symbolises eternal force then there can be a lot of comparisons with other symbols. Flowers develop themselves like beams or spokes bursting from out an axle. Therefor it is not surprising that there is a strong symbolic association between symbolical flowers and 'wheels'. A classical example is the wheel, which has a variable number of spokes depending of the traditions and representations but which always wants to express a deeper meaning. The most common wheels are those with six till eight spokes. In this double shape the Celtic wheel survived in the west till the end of the Dark Ages. The same representations (mostly with eight spokes) one will find often in Tibet and India but also in historical sites like Chaldea (southern Babylon - modern southern Iraq) and Assyria (ancient empire in Asia that was at its height between the ninth and seventh centuries BC) . Flowers with, for example, six or eight petals (like the Lily and most Lotus flowers) correspond with six- or eight-spoke wheels. Then the rose is often represented with a various number of petals. In general one could say that five petals symbolises the micro cosmos and six petals the macro cosmos.

Flowers in the western art of painting

In western art of painting flowers claim their place first as decoration but later also as symbol. To people in the 15th century nature seemed to be a forest of symbols, and flowers were, in their eyes, saturated with deeper meanings. Flower symbolism varies in the art of painting depending on era en area and therefore it is almost impossible to find all meanings with certainty. Omnipresent and known by most people is the lily as symbol for purity. The lily-of-the-valley is a known symbol for humility or modesty, the rose for love or sometimes discretion. Therefore one can find roses carved in the confessional boxes to symbolize the secret of the confessional. The thorns of the rose symbolize the children of Adam under the burden of sin. The daisy symbolized compassion, the violet modesty, the buttercup to show a non-marital status, a big violet meditation, the hogweed mildness, the apple the disobedience, the ear of wheat (among others) Eucharistic and the creeping cinquefoil symbolized affection. In the Dark Ages people really understood the allegoric language of the flowers but later that notion diminished. Flowers often are added to portraits and sometimes they still play a symbolic role, but from the 16th century and up they are mostly used as decoration.

Flowers have played an important role through the ages in the religious ceremonies of many nations. On rolls from Assyria and on Egyptian temples plants are depicted. The idea is that some like the Lotus and date palm had a ritual role. In the Aztec civilisation flower gardens were not only made to please the eyes of the people, artists and gods, they also contained many images and phases from the history of the beginning of the cosmos. Taoism knows the "golden flower" growing out of a skull, symbolising the highest mystical enlightening and has the same symbolic meaning as a life elixir. De flowering itself is the returning to the Centre, the Unity, the original status. In the Hindu ritual the flower ('pushpa') resembles with the element ether. In Hinduism as well as Buddhism the lotus flower is a very important symbol. In the ancient world (and also later in the Christian faith) flowers symbolised the springtime, they were seen as the children of light. The Latin 'flos' and the Greek 'anthos' means both flowering as inflorescence. Flowers were abundantly diverted over floors and used in wreaths and garlands. It was customary to throw flowers and leaves to a winner of a contest. Every February in Greece they had a "festival of the first flowers" ('anthesterien'). Flowers, in the Greek mythology are closely connected to the faith of lots of gods and heroes. The Celts and Old Germans thought that flowers (just as trees, stars and water) had a soul. Flowers were used to decorate temples, altars, pillars, gods, heroes, priests, sacrifices and victims. Little is known of the Celtic symbolism of flowers. But from the Old Germans lots of meanings are still known. The May month was for the Old Germans the time when Wodan/Odin returned from his honeymoon and together with his wife he brought back sunshine and the splendour of the flowers. They erected in the middle of a forest under old trees an altar and decorated it with fresh spring time green flowers and leaves. With the christianising of the German areas they hang holy statures to those former sacred trees, especially the statue of Maria. In the 17th century the month when the blossoms come out was dedicated to Maria and since then May is called "Maria-month". Also the Romans dedicated the third year of their month (May) to the flower goddess Maia. Many Hebrew sarcophagi have decorations of flowers or contain mummified flowers. One botanist once recognised 46 sorts (poppy, pumpkin, larkspur, daisy, pomegranate etc.) In the biblical symbolism flowers play important roles: they symbolise the mortality and transitoriness of all earthly things and the shortness of the human existence on earth.