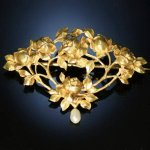 See our: rose jewelry or our floral jewelry.

Roses are ancient symbols of love and beauty. The rose was sacred to a number of goddesses (including Isis and Aphrodite), and is often used as a symbol of the Virgin Mary. Roses are so important that the word means pink or red in a variety of languages (such as Romance languages, Greek, and Polish).

The rose is the national flower of England and the United States, as well as being the symbol of England Rugby, and of the Rugby Football Union. It is also the provincial flower of Yorkshire and Lancashire in England (the white rose and red rose respectively) and of Alberta (the wild rose), and the state flower of four US states: Iowa and North Dakota (R. arkansana), Georgia (R. laevigata), and New York (Rosa generally). Portland, Oregon counts "City of Roses" among its nicknames, and holds an annual Rose Festival.

Roses are occasionally the basis of design for rose windows, such windows comprising five or ten segments (the five petals and five sepals of a rose) or multiples thereof; however most Gothic rose windows are much more elaborate and were probably based originally on the wheel and other symbolism.

A red rose (often held in a hand) is also a symbol of socialism or social democracy; it is also used as a symbol by the British and Irish Labour Parties, as well as by the French, Spanish (Spanish Socialist Workers' Party), Portuguese, Norwegian, Danish, Swedish, Finnish, Brazilian, Dutch (Partij van de Arbeid) and European socialist parties. This originates from the red rose used as a badge by the marchers in the May 1968 street protests in Paris. White Rose was a World War II non violent resistance group in Germany.

Roses and their supernatural and literary attributes

More info on the rose

The following is from: An Illustrated Dictionary of Jewelry, autor: Harold Newman, publishers: Thames and Hudson