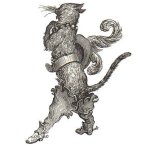 Once upon a time . . . a miller died leaving the mill to his eldest son, his donkey to his second son and . . . a cat to his youngest son. "Now that's some difference!" you might say; but there you are, that's how the miller was! The eldest son kept the mill, the second son took the donkey and set off in search of his fortune . . . while the third sat down on a stone and sighed, "A cat! What am I going to do with that?" But the cat heard his words and said, "Don't worry, Master. What do you think? That I'm worth less than a half-ruined mill or a mangy donkey? Give me a cloak, a hat with a feather in it, a bag and a pair of boots, and you will see what I can do."

The young man, by no means surprised, for it was quite common for cats to talk in those days, gave the cat what he asked for, and as he strode away, confident and cheerful. the cat said. "Don't look so glum, Master. See you soon!" Swift of foot as he was, the cat caught a fat wild rabbit, popped it into his bag, knocked at the castle gate, went before the King and, removing his hat, with a sweeping bow, he said: "Sire, the famous Marquis of Carabas sends you this fine plump rabbit as a gift." "Oh," said the King, "thanks so much." "Till tomorrow," replied the cat as he went out. And the next day, back he came with some partridges tucked away in his bag. "Another gift from the brave Marquis of Carabas," he announced. The Queen remarked, "This Marquis of Carabas is indeed a very courteous gentleman."

In the days that followed, Puss in Boots regularly visited the castle, carrying rabbits, hares, partridges and skylarks, presenting them all to the King in the name of the Marquis of Carabas. Folk at the palace began to talk about this noble gentleman. "He must be a great hunter," someone remarked. "He must be very loyal to the King," said someone else. And yet another, "But who is he? I've never heard of him." At this someone who wanted to show people how much he knew, replied, "Oh, yes, I've heard his name before. In fact, I knew his father."

The Queen was very interested in this generous man who sent these gifts. "Is your master young and handsome?" she asked the cat. "Oh yes. And very rich, too," answered Puss in Boots. "In fact, he would be very honoured if you and the King called to see him in his castle." When the cat returned home and told his master that the King and Queen were going to visit him, he was horrified. "Whatever shall we do?" he cried. "As soon as they see me they will know how poor I am." "Leave everything to me," replied Puss in Boots. "I have a plan."

For several days, the crafty cat kept on taking gifts to the King and Queen, and one day he discovered that they were taking the Princess on a carriage ride that very afternoon. The cat hurried home in great excitement. "Master, come along," he cried. "It is time to carry out my plan. You must go for a swim in the river." "But I can't swim," replied the young man. "That's all right," replied Puss in Boots. "Just trust me." So they went to the river and when the King's carriage appeared the cat pushed his master into the water. "Help!" cried the cat. "The Marquis of Carabas is drowning." The King heard his cries and sent his escorts to the rescue. They arrived just in time to save the poor man, who really was drowning.

The King, the Queen and the Princess fussed around and ordered new clothes to be brought for the Marquis of Carabas. "Wouldn't you like to marry such a handsome man?" the Queen asked her daughter. "Oh, yes," replied the Princess. However, the cat overheard one of the ministers remark that they must find out how rich he was. "He is very rich indeed," said Puss in Boots. "He owns the castle and all this land. Come and see for yourself. I will meet you at the castle." And with these words, the cat rushed off in the direction of the castle, shouting at the peasants working in the fields, "If anyone asks you who your master is, answer: the Marquis of Carabas. Otherwise you will all be sorry." And so, when the King's carriage swept past, the peasants told the King that their master was the Marquis of Carabas.

In the meantime, Puss in Boots had arrived at the castle, the home of a huge, cruel ogre. Before knocking at the gate, the cat said to himself, "I must be very careful, or I'll never get out of here alive." When the door opened, Puss in Boots removed his feather hat, exclaiming, "My Lord Ogre, my respects!" "What do you want, cat?" asked the ogre rudely. "Sire, I've heard you possess great powers. That, for instance, you can change into a lion or an elephant." "That's perfectly true," said the ogre, "and so what?" "Well," said the cat, "I was talking to certain friends of mine who said that you can't turn into a tiny little creature, like a mouse." "Oh, so that's what they say, is it?" exclaimed the ogre. The cat nodded, "Well, Sire, that's my opinion too, because folk that can do big things never can manage little ones." "Oh, yes? Well, just watch this!" retorted the ogre, turning into a mouse.

In a flash, the cat leapt on the mouse and ate it whole. Then he dashed to the castle gate, just in time, for the King's carriage was drawing up. With a bow, Puss in Boots said, "Sire, welcome to the castle of the Marquis of Carabas!" The King and Queen, the Princess and the miller's son who, dressed in his princely clothes, really did look like a marquis, got out of the carriage and the King spoke: "My dear Marquis, you're a fine, handsome, young man, you have a great deal of land and a magnificent castle. Tell me, are you married?" "No," the young man answered, "but I would like to find a wife." He looked at the Princess as he spoke. She in turn smiled at him.

To cut a long story short, the miller's son, now Marquis of Carabas, married the Princess and lived happily with her in the castle. And from time to time, the cat would wink and whisper, "You see, Master, I am worth a lot more than any mangy donkey or half-ruined mill, aren't I?"